Way back in October 2007 I took a leap into an old interest with a fresh start. It was hand woodcarving. I posted a series of Blog articles in Ramblin' Dan on my progress carving some santa heads from some drawings I downloaded from where else, the Internet.

This is going to be a repost of those blog posts as I think they are a good fit here in The Hobbyist Workshop. In fact I started a new category just for carving.

This can spread into other forms of carving than just wood. Only time and my varing interest will determine where. Let's me just say my carving interest has just re-sparked enough to make me want to centralized this work from five plus years ago. Dang... it really doesn't seem that long. I have created a few other carvings since then and now I am thinking I should try a little more while I have hands that still work.

Here is where I got started:

I ordered a basic wood carver tool set today. I have been doing some interesting wood carving (vaporizing) with a high speed air powered rotary hand piece. I enjoy the creativity of carving. I just remove everything that doesn’t look like what I want. Ha!

Actually there is a bit more to it than that but it is the main idea. I haven’t done serious knife and wood carving since Boy Scouts. I did get a merit badge in carving about 45 years ago. I have no real carving knives or tools (gouges) at this point in my life so I ordered a beginner’s set on the Internet from Little Shavers Woodcarving Supply in Seattle, Washington.

There are a lot of suppliers available, but this is the place where I found a reasonably complete set of beginners’ tools (and accessories) at a very reasonable price. Good information too. I figure I can always upgrade to more pricy tools if I get the bug and need better tools to do more. I like the fact that this fellow Rick is very youth oriented.

Some of the carving I want to do is not suitable using the high speed hand piece. The dust produced by the rotary tool is also not healthy. Cutting real chips on the other hand is much more user/producer friendly. They can still be a mess but they are not filling up my sinuses and maybe lungs with wood fibers.

Another benefit I want to test is to see if the carving will help or perhaps hinder the strength problems I have in my hands. My CMT damage is now in my hands and arms as well as my legs but not as bad. I hope working with my hands will keep the wires (nerves) connected. The worst that usually happens is cramping.

Watch for some show and tell when I kick this into gear. 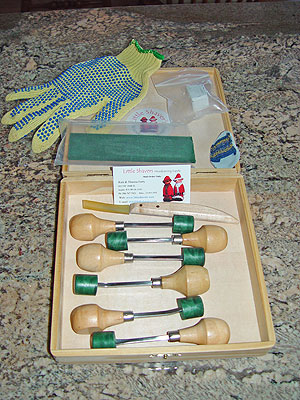 Here is the wood carving set I ordered from Little Shavers Woodworking Supply. The kit arrived on Saturday, which was only a few days after I ordered it. Everything  you see in the picture is included in the set except the granite counter-top. My wife Gloria owns that.

The kit is ordered by glove size. Yes, realy. The glove is Kevlar and can help prevent whacking a finger or palm with the verrry sharp tools. A stab will probably still get me but a slice may be avoided. The glove will fit either hand.

The white cube at top right is jewelers rouge used to “charge” the leather strop; which is the green block at the bottom of the lid. These two items are used to keep a very fine edge on the knife and other tools. The last item in the bottom right of the lid is a leather thumb guard to help prevent the little cuts suffered when making paring cuts toward the thumb on the knife hand.

In the bottom of the box is the business card and the (to be) most used carving knife. The rest of the tools are assorted small gouges and veiners. I won’t go into detail on them. Note that every sharp edge tool includes a guard.

Every tool is pre-sharpened and ready to use when received. No tedious work developing the cutting edges. All IÂ have to do is maintain the edge provided.

In my opinion Rick Ferry does a great job in putting a useful set of tools into a beginners hands. The best part is there is safety evident everywhere. Don’t take my choice of the word “into” to literally. ~ Dan’l 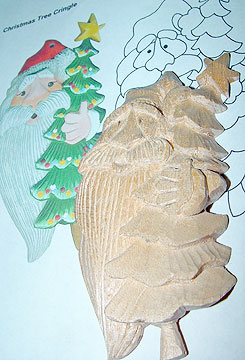 Whoa! I really got into the wood carving this weekend. In fact I kind of over did it. I think I spent two eight hour plus days doing nothing but carving a Santa. It is like a big cookie, high relief in a small 4 x 6 x ¾ inch slab of Basswood. My arms (not so much my hands) are telling me that was a bit much for just getting started. I think that means I am using the correct arm muscles and not just my hands.

Only a few drops of blood were shed when the very sharp knife point (like a pin prick) touched the back of my left middle finger. That doesn’t count so no real cuts! I have done the same or worse with a #11 X-acto blade building model airplanes.

I spent a lot of that time honing the bench knife and trying to get every tool extremely sharp. That is the secret to easy carving.

The project looks very good IMHO. A little more clean up and I will be finished with this first carving. Then I have to paint.

I like the totally free creativity in carving, so this is already habit forming. There are lots of subjects I want to carve. I have discovered another art form I enjoy. Soon every piece of wood I own is going to look like it needs a carving on it 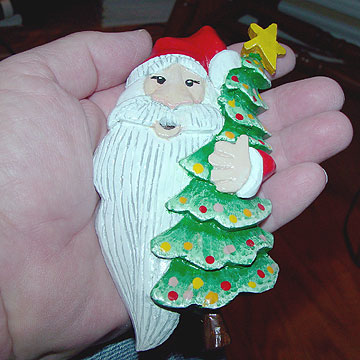 Here is my Santa carving after the paint job. Perhaps not the greatest work of art but I don’t think too bad for a first attempt. That just means there is a lot of room to get better.

I want you to note there are no gaping wounds in my left hand. I know what you are thinking… at least not any that Dan is showing. Well, I did come through OK so I have no fear of starting the next project.

I did discover there is as much work in the painting as there is in the carving. I now have a better idea what I can do with paint and how to make it work with the carving. I did have some comments that it looked pretty good without the paint. The paint does not cover up errors in carving so the base has to be good before paint. 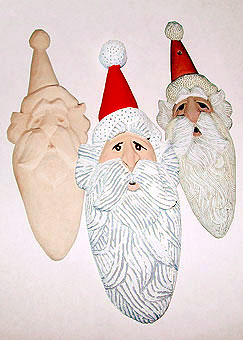 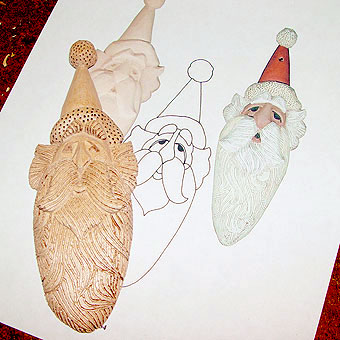 This is my second carving of the Christmas Santa’s. This fellow has a fancier beard. The picture to the far right is the finished and painted carving. It looks like it is a part of the page. (It’s the one in the middle!) You can can see I made it a bit bigger than the pattern. The larger picture is the same background and was made just after I finished the wood carving work. I wasn’t real happy with the beard lines in the Santa with Christmas Tree carving so for this one I connected up the high speed rotary carving tool I bought last year. It was perfect for carving the lines. A little more practice with my CMT hands and I can start to do finer lines. This looks pretty good though. These are not kits, I started with only the drawing you see in the picture. I band-saw a 3/4 inch slab of Basswood off a big block I bought, smooth it up and lay out (trace) the carving. I think it is a great way to get started in wood carving. 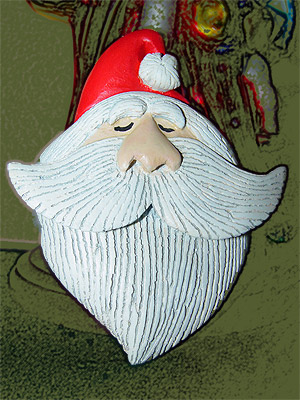 Yes, I am still carving and hand painting. Here is (Sleepy) Santa #3. I am getting a bit better (I think) with each new face. I also decided to play around with Photo Shop and do a cool background edit for this picture. The face is nearly the same size as the other carvings I have posted here.

The background wasn’t really staged for this shot. It is the mantle in the living room. I just walked up and fired off a few close shots with the Sony digital. This Santa is leaning against a very colorful glass Santa like the old fashioned glass tree ornaments… only much larger. So as not to let the background detract from the carving I decided to play a bit.

Gloria didn’t want these carvings to look “spiffy new” so there is a little intentional “aging” and debris to make it look like its been hanging around for quite awhile. It really doesn’t show up too much in this photo.

I hope you enjoy a Merry Christmas! ~ Dan’l