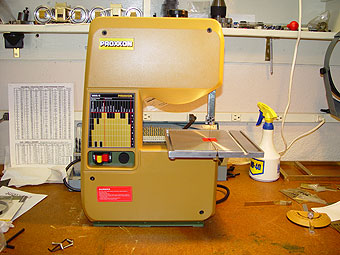 I have done a lot of research trying to find a reasonable cost small variable speed table type band saw with a small depth (1/4 inch or less) blade. By depth I am referring to is from teeth to back edge. I want variable speed because I need to cut small ferrous and non-ferrous metal parts as well as occasional small wood parts.

Metal parts are generally cut with a slower speed than wood if you are wondering why variable (or multi) speed is important.

The small table type band saws seem to come and go in the market place. I believe the reason is -- they are purchased by a lot of home shop people who have no idea of the inherent limitations in a low cost light weight power saw. Many times it may be their first experience in choosing a saw.  So of course without guidance and using price as a determining factor, they pick the least expensive on the store shelf at the bulk supply home store. Many user reports I see (on web pages) tell the fact that they soon returned the "weak" saw and eventually purchased a larger one.

I believe many of these folks have no idea how to set up a table band saw. They take them out of the box mostly assembled, add a few parts, and plug them in “to see how they run”. It is a very tough, inexperienced market to satisfy.

I have examined these little table type band saws in the stores and most of them are suitable for wood work only. Some definitely are a poor quality choice, but the variable speed ones (when I can find one) are more expensive and generally better made. I bet they don’t sell well because of the price.

Sears had a very nice looking 3 wheel variable speed band saw, but I don’t see it listed any longer. There are several reasons I believe why. A 3 wheel saw gets a bad rap as there is an urban legend about bad tracking for any and all three wheel saws, perpetuated by “experts” who never owned one. It is also claimed the smaller wheels “bend or flex the blade too much”. They just repeat almost word for word what they hear or read elsewhere. All band saws flex the blade and this "work hardening" is what eventually makes them break. Quality blades are the solution and do go a lot longer.

All band saws need alignment tuning and my bet is the three wheel needs a bit more “tuning” than a two wheel. Since most new users don’t adjust a two wheel properly, the average 3 wheel new user has a chance the three wheel may be an impossible challenge for them to make run true, assuming the machine is/was adjustable. Unskilled consumers are just not a good market for that kind of tool.

So a small table band saw with the “right stuff” for metal cutting would be nice. I don’t care about the number of wheels. The extra wheel was used to create a lower saw with a wider throat. Good if you really need it in a small machine but two wheels are the most popular.

I have a Proxxon Micro Band Saw (shown here) that fits the bill for me. It is a two wheel band saw and it too must be tuned when first set up to get the best operation. I explain how to do that in my THMS website.

I have to emphasize that it is a MICRO band saw. That infers light duty and certain finesse when using it. The user must let the blade do the work. A micro band saw is one step up from the tiny bladed, reciprocating action scroll saw. The finesse to which I refer for the micro band saw is similar to that of the scroll saw; let the blade do the work.

With the limitations clearly understood, this band saw works wonderfully for cutting the small metal parts I often work with. I need to add the (available) water cooling as metal parts often get too hot for me to hold. That shows work is getting done as hot metal means the saw is cutting fairly fast. I use the more expensive (than wood cutting blades) bi-metal metal cutting blade. Wonderful.

I have worked in a larger shop where we had a large (14 inch) table type band saw set up just for cutting aluminum. It was wonderful tool but it couldn’t be set on the bench where I was working, it wasn't water cooled and cost about $800 used. So there are the alternatives.

But with all considerations, the Proxxon MBS/E micro band saw is the right solution for my current needs.